Jill and I met in 1998 in Aurora, Missouri at Union Planters Bank where we were both hired. It was an instant bond since we both "weren't from around there". She was from Illinois, around Peoria and I was from Northwest Indiana. We both talked fast and wore weird shoes, far as those Missouri folks were concerned. 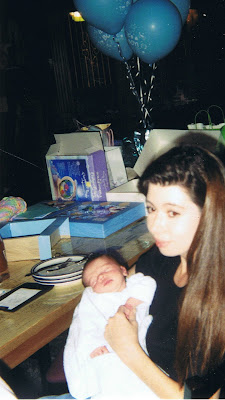 Phil was gone a lot. We'd just purchased our very own semi and he was driving it alone. I'd come off the road so we could start trying to have a baby. I conceived Zane January 24, 1999. Jill was my labor coach and only friend. Many days, she's what kept me from going batshit crazy.

She even painted my toenails.

She was the only one physically with me at Zane's birth. She fed me ice chips and comforted me.

I'll tell you more about our adventures when I can get through them. Right now, I'm typing through my tears and I just don't think I can go there.

Jill had emailed me on my son's birthday in October 2005 to tell me that she'd had breast cancer for a year, had a mastectomy, chemo and was "allll better". I believed her.

In November, the following month, I had the chance to go down to South Carolina to visit her, I hadn't seen her in 5 years. So I went and we had such a good visit.

Then in September of 2006, she called me to tell me her lung had collapsed. She was scared and alone. Zane and I rushed down to take care of her. 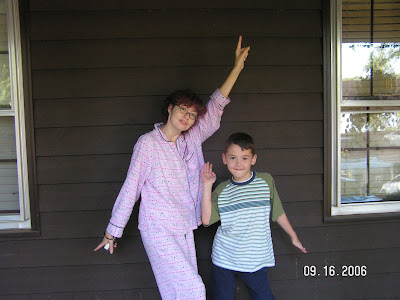 A year later, October of 2007, she called telling me she was low on blood and had to get some on Halloween. Just like her. I did some research and found out this meant the cancer was no longer in remission.

I got another call last week, Jill's neighbor, saying that Jill was not doing well and might not have much longer. So I packed up and headed down there.

I spent a week there, thank God I got to see her when she was still coherent. I got her ice chips and I even rubbed her feet. We used our Lamaze signals for her pain this time.

I want to say more, but I can't right now.

Posted by ~michelle pendergrass at 12:36 PM

Crying with you, babe. Only wish I'd gotten to meet her here too. I will someday.

That was a beautiful tribute to her.

I came to say what Jen said. The beauty of this tribute brought tears. Friendships are dear and all the more special when they're for an eternity.

When I saw the one-word title, I thought it might be similar to your WW picture (Chuck).

I smiled as I began reading, but my lips slowly turned direction. I lost my mother and grandmother to breast cancer, my sister is a ten-year survivor. I hate it.

How beautiful, though, the joyful and heart-breaking moments the two of you shared. Your friendship endured; you knew when you needed each other.

{{Hugs}} to you now, I know the grief will linger, so thankful sweet memories will, too.

(lump in my throat, tears in my eyes...precious words here to honor your friend :) ).

Im so sorry to hear of your loss. Im keeping you in my prayers.

Thank you all for your thoughts and (((hugs}}}